Burnley taught Cardiff City a lesson in taking its chances, as Sean Dyche's men left Wales with a 2-1 win despite being second best.

ARDIFF CITY WERE made to rue their wastefulness in front of goal as they slumped to a fourth successive Premier League defeat courtesy of a 2-1 home reverse to Burnley.

Neil Warnock’s men came into the match on the back of games against Arsenal, Chelsea and Manchester City, and although there were flashes of promise, they paid the price for their profligacy.

Cardiff were vastly superior in the first period without capitalising and were duly punished after the break when Burnley took the lead through Johann Gudmundsson’s header.

The home side kept their focus and deservedly levelled through Josh Murphy at the end of a fine move, but Burnley rallied and ultimately consigned Cardiff to another defeat through Sam Vokes’ winner 20 minutes from time.

Despite their recent woes, Cardiff began the encounter brightly and an early Callum Paterson pass across the face of goal caused panic, but Josh Murphy could not reach it. 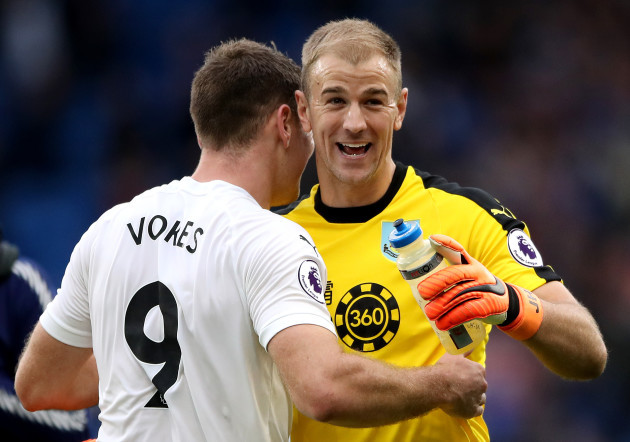 The former Norwich City youngster did go close in the 17th minute, playing a one-two with Greg Cunningham before hitting the post from a tight angle.

Burnley found themselves clinging on by half-time, with Kenneth Zohore forcing Joe Hart into a smart save, before Paterson saw a close-range header cleared in front of the goal-line by Matej Vydra.

Sean Dyche’s men took the lead against the run of play five minutes into the second half, as Gudmundsson rose above Greg Cunningham to beat Neil Etheridge with a header at his near post.

Parity did not remain, however, and Burnley left with all three points as Vokes steered a header into the bottom-right corner from Gudmundsson’s cross in the 70th minute.

Cristiano Ronaldo is keeping himself fit with girlfriends at home, video shared

Sign up to our newsletter and receive daily sports updates to your email!